In the second part of the movie just for the adult audience about the adorable office nymphs, we’re going to open up new sex stories. These hot employees and even the leader, often in the workplace think about sex, who fantasize about the issue of sexual intercourse. Some of them are willing to translate their desires and desires of their bosses into life, satisfied the insatiable sexual impulses, which continue to participate in their direct duties.

Julia Roca Their flirting during work hours reached its passionate peak when Julia brought Jay a cold drink while he was straining the pool, and he took off his undershirt to give her a closer look at his athletic body. Later, when they bumped into each other in the upstairs hall, Jay wasted no time pushing Julia up against a wall and kissing her right on the lips. Inside one of the empty hotel rooms, Jay pulled Julia’s panties aside and started fingering her clit, then he licked her pussy until she was soaking wet and desperate to fuck. Julia sucked on Jay’s cock first, wrapping her lips around his shaft, then laying back on the bed so he could thrust all the way deep inside her.

Carolina Abril The last time Carolina Abril’s boss summoned her into his office to go over some mistakes she’d made on the big file, she deflected some attention by flouncing her boobs right in Chad’s face. Her cleavage stuck in Chad’s mind, and when he couldn’t shake the sight from his mind, Chad called her back to see about making his daydreams into reality. Carolina was just as eager to explore her workplace sex fantasy, so she slipped under Chad’s desk and pulled his hard cock out of his pants to suck him off. After giving Chad a blowjob, Carolina climbed on the desk and spread her legs wide to get fucked hard until she was screaming for more!

Ella Hughes By the time that saucy redhead had peeled down her dress, and crawled below Marc’s desk wearing little more than garters and stockings, he was desperate to feel her mouth on his throbbing cock. Ella didn’t stop teasing him even when the boss walked by and nearly caught them, then she kept tugging and sucking Marc’s hard-on. Ella straddled Marc on the couch, riding him cowgirl as he squeezed big handfuls of her thick butt. Marc bent Ella over his desk and spanked her, then licked her asshole and pounded her from behind until he painted her lips with a massive load! 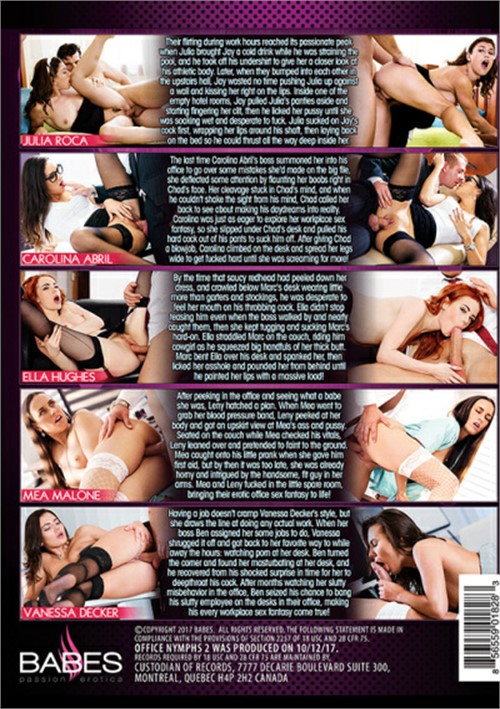